Letter of Recomendation | A Saftey Meeting by Manwolves 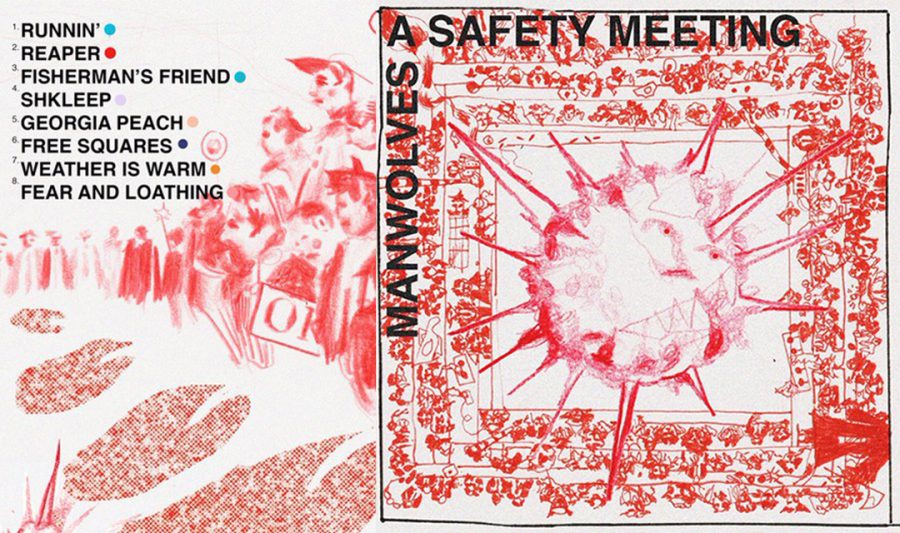 Manwolves are an up and coming six-piece band from Evanston, Ill. with a unique sound that fuses hip-hop, rap, jazz, rock and more. They have been a staple in the Chicago independent scene for the last few years, sporadically releasing singles since their debut song “Nothing From Nothing” in the fall of 2014. Soon after the release of “Nothing From Nothing” Manwolves came out with “You”, which was the first song to garner any critical attention and is still one of their most prominent songs to date. Over the next four years, Manwolves would release just 10 songs but continued to tease their biggest project yet. On September 13th, 2018 Manwolves released their debut album “A Safety Meeting” nearly doubling their set list overnight.

While the album released with eight songs to its name, two of them were re-releases of singles so fans were only treated to six new songs. However, what the project lacked it quantity was surely made up for with its quality. From the first song onward Manwolves are able to capture the same magic they had with their more celebrated songs like “These Days,” “You,” and ”Sauce.” The unique sounds brought to the table by each of the members really mesh well together in this album, more so than usual. This album might not catapult Manwolves into the stratosphere of mainstream popularity, but it certainly is a step in the right direction and has already caught the eyes of thousands of new fans.

Currently standing a little over 150,000 monthly listeners, Manwolves have grown rapidly over the last few years and, in turn, their music has matured over time. This is evident from their first song onward, in “Runnin’” they show off each of their members talents more than any other song. Clocking in at just over five minutes, the song takes full advantage of every moment. Vocalist Jamie McNear shows off his range and is backed up by the upbeat solos from trumpet and player Michael Werner. The connection between McNear and Werner is reminiscent of another, albeit more well known, Chicago tandem, drawing comparisons to the early collaborations of Chance the Rapper and Donnie Trumpet. Even with the limelight placed on Werner and McNear through most of the song, the other band members are still given their moments to shine.

Next on the track list is “Reaper” which was released shortly before the album itself and quickly became one of their most popular songs with the music video having amassed over 11,000 views at the time of writing. The third song, “Fisherman’s Friend” keeps up the pace of its predecessors and a noticeably strong performance by Julian Freeman on the drums allows the song to stand out amongst the pack. “Shkleepy,” named after Julian McNears popular catchphrase, features an extended solo from Werner in one of his best performances to date and really shows the versatility of each and every one of the members. McNear slows down the tempo in Georgia Peach, his heartfelt lyrics are strung together by powerful bass and guitar performances from Henry Wolf and Eli Cohen. The band use the momentum of Georgia Peach to ride out the rest of the album putting in a strong performance for each of the remaining songs.

Despite the small sample size that Manwolves have given us, I think it’s safe to say that they are one of the most consistent bands in the world right now. The six-piece are able to cover each other’s weaknesses when they have to but most of the time it’s not necessary. The Chicago natives obviously put in a lot of effort with this album and it pays off, their debut LP is a fantastic first impression and a testament to their uncapped potential.