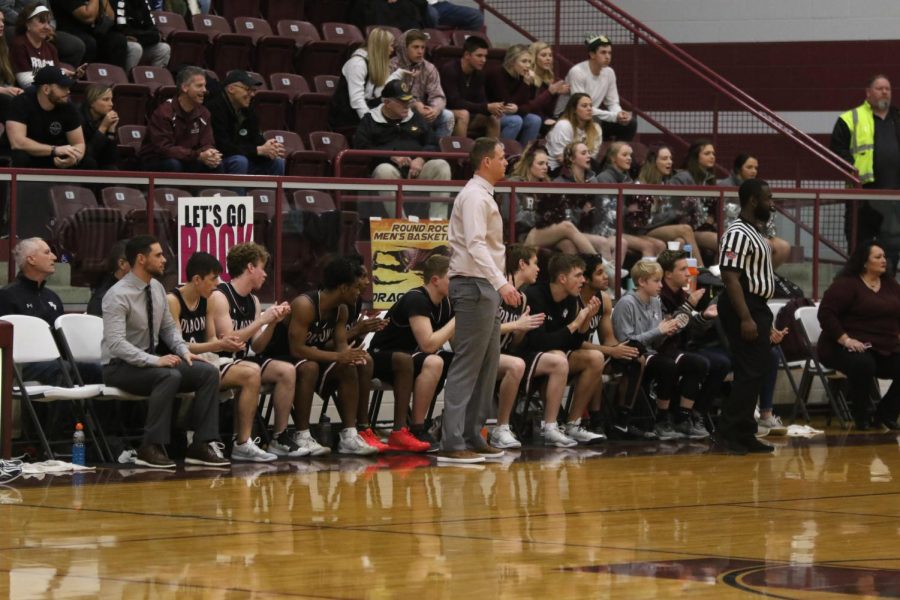 Coach Murphy leads from the sideline during last year's playoffs.

The 2018-19 varsity basketball team was the most successful in more than 20 seasons. Their 23-11 record earned the team a second-place finish in the district, the highest finish since their 2012-13 campaign. For the first time in a while, the Dragon basketball team finally has some excitement surrounding them as the season gets closer to tipping off. It is just under a month left until the first game of the regular season and just a couple weeks away from the first scrimmage.

“Every year has different struggles,” Coach Brent Murphy said. “Some years it is managing egos and helping kids understand what their role for the team is. Getting kids to buy into a team-first mentality takes time and trust. We graduated 10 seniors last year. Our biggest goal this past summer and fall has been coming together as a team and establishing team chemistry. We have played in the Summer League, UT Team Camp, Fall League, as well as performing performance course weight training three days a week before school, and participating in various community service opportunities.”

One of the biggest concerns for the upcoming season is the lack of varsity experience among the new lineup. 10 of the 13 players on last year’s varsity team have since graduated, including the two leading scorers from last season. The last time an exodus of this size occurred was 2015,  the team dropped from 19 wins during the previous season to just 8.

“Roster changes are difficult year to year but there is also something great about getting to start new and letting others step up and fill the shoes of some of our past great players, but no question, replacing 30 points a game is going to be a challenge, one that we are looking forward to,” Coach Murphy said.

Competing in one of the toughest districts in Central Texas and doing it with an under-experienced roster is obviously going to be a challenge. Between Hendrickson’s three year 20-win streak and the number one ranked power forward in the nation in Vandegrift’s Greg Brown III the team will certainly have their work cut out for them, but this is not a situation wholly unfamiliar to coach Brent Murphy. The University of Texas at El Paso alumnus and participant in the 2004 and 2005 NCAA Tournaments faced similar challenges during his time as a college athlete. Mostly overlooked as a high school recruit, Murphy decided to take his talents to the now-defunct Lon Morris College, a Division 1 NJCAA school, with hopes of transferring to a larger program. While only around 1% of junior college basketball players ever make it to a Division 1 NCAA team, Murphy impressed enough at Lon Morris to prompt an offer from UTEP. Murphy is entering his fifth year as the head coach of the varsity squad. To this point, he has compiled an overall record of 59-69. While his tenure got off to a rocky start, putting together a record of 17-45 over his first two seasons, the team has improved their win total every year under Murphy.

“Most, if not all, of the decisions I make as a head coach are influenced by my former coaches,” Murphy said. “My father was my high school coach at Pflugerville High School and I had two tremendous coaches in college. Billy Gillispie recruited me at UTEP and I was fortunate enough to be on a team that went to two straight NCAA tournaments and one NIT berth. Coach Gillispie later went on to be the head coach at Texas A&M, Kentucky, and Texas Tech. I also played for Doc Sadler after Coach Gillispie left, who went on to be the Head Coach at Nebraska. I learned toughness and how to get outside of my comfort zone in college and those are things that have to happen with our young team this year if we want to be competitive. The future is extremely bright but I would prefer to go ahead and win now as well.”

The varsity roster is set to be finalized towards the end of October, to see the full schedule and keep up to date with the team visit their website here.