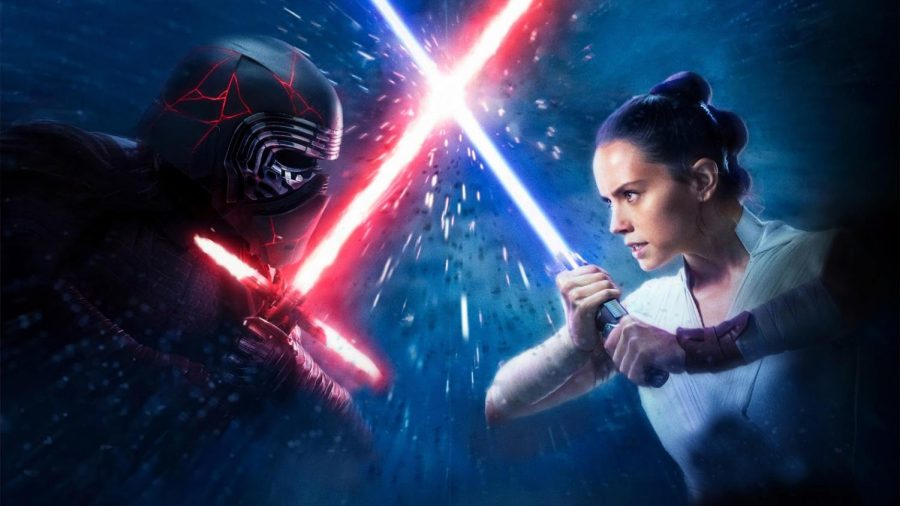 The Rise of Skywalker

I’ve been watching Star Wars since I was in elementary school, luckily, since my parents never liked the franchise, I managed to avoid the prequels for quite a while. “The Clone Wars” and the original trilogy were my only exposure to the Star Wars universe until “The Force Awakens” came out in 2015. Since then, I’ve fallen in love with Star Wars and, despite my immense disappointment in Rian Johnson’s apparent sequel “The Last Jedi,” I was cautiously excited going into episode nine of the Skywalker saga.

The critical reception to this film was… less than stellar, to say the least. This, however, didn’t worry me too much as I’ve pretty much lost all faith in critics when it comes to Star Wars movies after the reviews for “The Last Jedi” came in. Despite The Last Jedi’s unwarranted changes to characters that were established in “The Force Awakens,” purposeless new characters and massive plot holes, critics around the world praised the film for being different and standing out in the Star Wars universe. This came as a shock to me as the only thing that I thought stood out about the film was its prequel-level writing, but who am I to say that it’s ridiculous for a former child soldier to need to be lectured on the horrors of war.

“The Rise of Skywalker” quelled any doubt I had in my mind within the first 15 minutes. We are finally introduced to the Kylo Ren that we have been told about over the past two films. Released from the shackles of his master’s control he is now on a mission to find the newly resurfaced Emperor Palpatine. The first half of this movie is certainly jam-packed with new information. A feature that a lot of people like to call out when critiquing this movie. The problem with that argument is that it doesn’t ask the question as to why JJ Abrams needs to relay so much information to the audience in such a short time. Which is, of course, because “The Last Jedi” puts the trilogy on pause to introduce a few awful characters, run around a casino for a while and shove its tiny amount of actual story development into the last 20 minutes of the movie.

In fact, a lot of this movie’s problems can be traced back to the shortcomings of its predecessor. Rushed character development? Abrams had to make up for the time wasted in “The Last Jedi.” The Knights of Ren feeling like an afterthought? At least they were actually in this movie, instead of being completely ignored like they were in “The Last Jedi.”

The Rise of Skywalker introduces many intriguing concepts that have yet to be explored in the Star Wars universe giving us a glimpse at what could have been if Abrams had been allowed to direct all three films. We were able to see lightspeed skipping in action, a technique that was too dangerous for even Han Solo to attempt in “A New Hope.” We met companions who did justice to those of the original trilogy in D-0 and the incomparable Babu Frik. We were given further insight into Leia’s Jedi training, finally got to see Rey’s true power, and learned the nature of her connection to Kylo Ren.

Speaking of Rey, a lot of backlash has come out of the decision to make her Palpatine’s granddaughter, and the decision to include Palpatine at all. While I understand that this is just a matter of opinion, I think it was fitting to have Palpatine play a big role in the sequel trilogy. He is the one who sets everything into motion in the prequels and the main antagonist of the originals. It is only right that the conclusion of the Skywalker saga puts an end to the battle between the Skywalkers and the Palpatines. Rey being a Palpatine makes sense when you think about her relationship with Kylo. As dyads, they share a unique bond through the force, as Kylo says they are “Two that are one.” With that in mind, it would make sense that they would experience the same internal struggle, both fighting against their lineage. They are two sides of the same coin. While Rey fights against the pressure of her destiny, Kylo fights against his past to return to the light side.

Despite its flaws, I see, The Rise of Skywalker, as a fitting end to the Skywalker saga. No, it isn’t perfect, but it is wholly Star Wars. From the epic lightsaber duels to the tear-jerking moments to John Williams swansong, Episode IX of the Skywalker saga is a movie made with Star Wars fans in mind and, in my opinion, is one of the best things to come out of Disney’s acquisition of Lucasfilm.

I am deeply in love with Star Wars. From the high republic to the sequels, I have consumed as much Star Wars media as humanly possible for close to 11 years. From staying up late watching “Star Wars: the Clone Wars” on Cartoon Network to buying almost every Lego Star Wars set ever released, I would classify myself as a big fan. Some of my favorite memories come from Star Wars; seeing “Rogue One” for the first time with my family, having lengthy conversations about the canon and such at Chuy’s, and building the Lego Death Star at my kitchen table. Star Wars is a part of my life, and that’s why it’s so heartbreaking that The Rise of Skywalker is such a complete dumpster fire.

First things first; “The Last Jedi” is terrible and many of the movie’s problems are caused by “The Last Jedi” and it s inability to progress the Skywalker story. “The Last Jedi” completely destroys the world building done in “The Force Awakens” by killing Snoke, making Kylo Ren a weak and predictable softy, complete destruction of Luke’s character in the originals by changing from a hopeful leader into a sardonic quitter, and throwing off Finn’s story arc by making him a useless sidekick to arguably the worst Star Wars character ever created (yes, including Jar Jar); Rose Tico.

All of this aside, “The Rise of Skywalker” creates more problems than it solves: the inability to pull Finn out of the character rut that is him screaming “Rey” for half an hour, a very forced and ridiculous plot twist with Palpatine being the grandfather of Rey, and an unfortunate shunning of prequel era characters all culminate in a lackluster and disappointing finale to one of the biggest sagas in history.

Finn’s character arc in the sequel trilogy is utterly disappointing. In “The Force Awakens” Finn is an incredibly captivating character due to his wit, humility, and mysterious past, which is a perfect combination to make him an extremely likeable character, similar to Princess Leia and Han Solo. Instead, due to his character regression in “The Last Jedi,” he becomes very spare. This continues on into “The Rise of Skywalker” seeing as Finn’s dialogue consists of him screaming “Rey,” and him saying “I have something to tell you, Rey” which he never actually tells her.

Palpatine is the most ridiculous choice for this film’s villain. The notion that he lived through “Return of the Jedi” and was able to survive totally unbeknownst to the entire galaxy and Luke Skywalker is entirely lazy storytelling and also an extreme stretch. Then, they compound on that laziness by making Rey a Palpatine for seemingly no reason other than to justify her immense force ability. One of the best parts of Rey’s character in my opinion is that she is truly no one, meaning she falls under the classic interpretation of the force which is that anyone and everyone is connected to it. The only reason I can see Palpatine being the villain of this movie is JJ Abrams not finding a viable villain after the death of Snoke in “The Last Jedi.”

The lack of representation for prequel era characters is one of the biggest problems I have with this movie. I understand that the prequels are bad. I agree that they are bad, but a complete disregard for these characters means leaving out a significant proportion of fans who love that era of Star Wars. The clone wars television shows and games means an entire generation of fans grew up seeing the heroics of Anakin, Obi-Wan, Mace Windu. Although their voices can be heard in the climactic throne room scene, this is still not enough for me. I really wanted to see these characters I grew up with recreated on the silver screen just one more time so I could have my final goodbye to them. Instead, the only characters we get to see get a true ending are Luke and Leia, thus ignoring the entire prequel era.

All in all, the majority of these problems stem from “The Last Jedi” destroying the pace and storyline that began in “The Force Awakens.” Therein lies the problem. “The Rise of Skywalker” does not come close to redeeming the problems of “The Last Jedi” and instead lazily attempts to wrap up the saga in some butcher paper and a tacky string bow. Its inability to let its core characters shine, nonsensical villain, boring and frivolous plot twists, and its ignorance of prequel era characters led me to the darkest corner of the force in the theater, bringing me nothing but pain, suffering, and hatred towards this movie.